Creating a postcard mailer can seem complicated, but it need not be. Leonardo Da Vinci is often credited with the saying “Simplicity is the ultimate sophistication.” Translated to English and 500 years later, I’m not certain what context he intended for his famous quote. Being a renaissance man of many talents, was he referring to his work as an engineer, inventor, scientist, architect or artist? I would think all of the above. It is a phrase I always keep in mind when designing for direct mail campaigns. 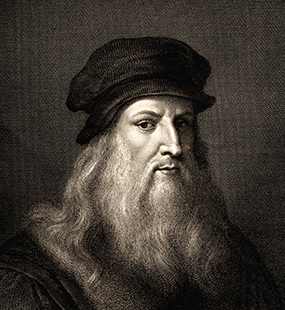 Perhaps Leonardo coined his phrase in reference to his many inventions — feats of engineering unheard of in his time. My father, Herb Johnson (W6QKI) was also an inventor and electrical engineer. He sold thousands of amateur radios in the 1960s and 70s under the idea of simplicity. He called it “the KISS principle,” an acronym meaning “Keep It Simple, Stupid.” Competing radios at the time included many fancy knobs, dials and features that my father found unnecessary, and eliminated from his own models. Doing so saved money for his customers, and made them much easier to work with for many ham radio aficionados. For my own postcard layouts, I have a lot of font options available. Some might even seem quite fancy. But using too many fonts will hinder readability. Stick with just one or two fonts that are easy on the eyes, and cut the rest.

In science and philosophy, Occam’s (or Ockham’s) razor is a concept used in problem solving. The name comes from William of Ockham, an English friar, philosopher and theologian, and one of the great thinkers of the Middle Ages. He wrote, “It is futile to do with more what can be done with fewer.” The idea is commonly described as the simplest answer to a problem is generally the correct one. Less likely hypotheses should be discarded. Similarly for direct mail marketing, I would discourage having too many offers on a piece. If you do have multiple offers, select the one most likely to generate response — what we like to call the mafia offer, too good to refuse. Emphasize that one first. $50 off your product? Call it out loud and proud. Free shipping, while nice to have, is generally expected these days. It can be stated plainly with your final call to action at the bottom, such as “Call now to get FREE shipping.” And that
“free oven mitt” giveaway you also wanted to include? You might want to rethink that one.

In graphic design, the “less is more” idea is something many designers adhere to. It is especially important when it comes to direct mail. When someone opens their mailbox, you only have a few seconds to gain their attention before your mailer may be discarded and sent to the recycling bin. A large, attention-getting headline can gain interest for a reader — as can a beautiful photograph or a compelling offer, too good to refuse. Body copy and bullet points should be trimmed as much as possible, with no more text than necessary. If you do have a lot to say, a folded self-mailer might be the way to go, with the bulk of the content being on the inside. Draw your reader in, and make them want to learn more. The more impact a postcard has at a glance, the more likely it is to get tacked up on a refrigerator, thereby extending your advertisement’s shelf life.

50 years later, my dad’s radios still have a cult following among ham enthusiasts. Being very easy to repair, many of the devices are still operational as the day they were new. I recently met a man who had quite a collection — a dozen or more of his radios. He was kind enough to part with one as a gift, one that he had not yet had a chance to repair. While this particular radio no longer works, that isn’t important to me. I keep it on my mantle as a reminder to “keep it simple, son,” because simplicity is the ultimate sophistication.