Is it Worth Adding Augmented Reality to Your Print Marketing?

The augmented reality market is set to be worth $19 billion by 2024 making it an incredibly new and exciting technology to keep your eye on.

But just like any other new tech, knowing how to use it effectively in your marketing is difficult and its misuse can become a costly mistake.

It’s already been established that print marketing is more effective than digital when it comes to attention and recall—but what about a combination of the two?

Until recently, the technology wasn’t able to blend the two worlds of Direct Mail marketing and digital together which is why the emergence of AR is so fascinating. Read on for a breakdown of the essential information you need to know. 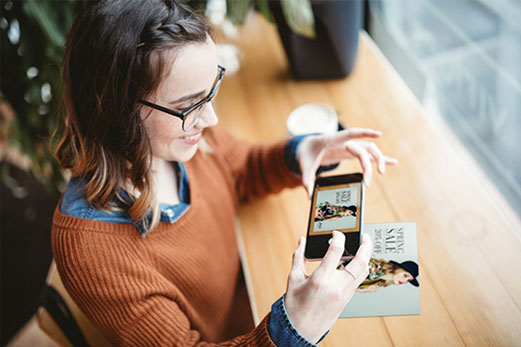 What is Augmented Reality?

As opposed to virtual reality which is an entirely computer-generated world, AR places a virtual image into whatever area your device’s camera is pointed at.

The most successful and famous example of AR to date was the Pokemon Go app which completely changed the future of mobile gaming. By placing the beloved characters in to the real world, it created a deeper experience for users that no other game could compete with.

It significantly increased AR’s profile and opened up enough interest for advertisers to see its commercial value and for companies to begin investing in it.

Pokemon Go was successful because the original story and games were about exploring the world and discovering Pokemon. i.e. the AR game had a relevant and direct reason to place the characters in the real world.

Whenever a new technology emerges, there’s always a risk that companies will start trying to use it even though they have no relevant reason to.

A lackluster example in print was when The New York Times had an issue around innovators. To commemorate this they had illustrator Christoph Niemann create covers that came to life as a moving cityscape when viewed through an app.

It didn’t bring in any new customers, issues weren’t flying off the shelves, so ultimately they spent thousands of dollars on something that was just vaguely amusing.

AR needs to be relevant to your business and actually add value.

The New Yorker could have greatly enhanced their issue if every article featured an AR company with an AR experience demonstrating what they do. It would have made every article more engaging while also serving as product demonstrations for each business and the technology itself.

The emergence of smartphones and app stores led to a surge in demands from clients that didn’t understand the technology or its cost. Requests were made so ignorantly that “let’s make an app” became a punchline in almost every advertising office (and it still draws a few chuckles today).

The average cost of an app is $50,000 for the most basic option. And since people are still not walking around with smart glasses and contact lenses, the only way to view AR is through a smartphone and, specifically, a purpose-built app.

While you can certainly find companies that say they build one for $30,000, the end result will be a shallow interpretation of what you had in mind. For AR apps like the Ikea Place, you’re looking well into over $100,000 upfront plus regular update costs.

Consumers don’t want to view adverts at the best of times. So very few are going to go through the trouble of downloading a new app on to their phone just to view them.

If you want to use AR you’ll need a big budget coupled with an insightful, intelligent idea to use the technology in a way that will generate sales while also being entertaining.

Go with What Works

Just like when social media first entered the market, the hype only lives up to the promise if you do the hard work to learn about the technology first.

Think about what experiences your brand currently offers consumers and how an AR integration could genuinely help them learn more about your business and encourage them to make purchases.

If you feel like you aren’t ready to make the leap just yet, print and Direct Mail marketing backed by powerful, accurate data is still the most effective way to bring in new customers and see a strong ROI.

Call 800-959-8365 to speak to one of our representatives and drive sales with your own data-driven direct marketing campaign.