A Tribute to Esther Howland, Mother of the Valentine

Somewhere in Southern California during the early 90s, I had a mini Valentine’s-Day-themed mailbox placed on my elementary school desk. It was covered with stickers and coveted by all my classmates — and I was beyond excited to get dreamy sentiments, cards, notes and candies “mailed” to me, on one very special holiday. 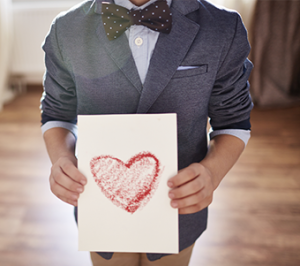 Valentine’s Day greeting cards were the Cadillac of card products because making them required creativity, personalization and a handmade approach. While some kids — or, let’s be real: some kids’ moms — would take the easy route and purchase store-bought valentines, my third-grade self had to go above and beyond. I would beg my mom to take me to Michael’s craft store, so I could carefully select just the right shades of pink and red cardstock. Then, like Cupid himself, I’d hunt down heart-shaped paper doilies, ribbon, buttons and glitter. Lots and lots of glitter. Once home, I would artfully and lovingly craft each card, reserving the finest ones for best friends and my secret Valentine’s Day crush.

Fast-forward to 2016: my 30-year-old self attributes my appreciation (and sometimes obsession) for stationery and beautiful paper goods to these early years, where much care and detail went into creating valentines. So, where did the inspiration behind American Valentine’s Day cards and sentiments originate from? This leads us to an entrepreneurial American woman, who most likely had a bigger passion for glitter than I do.

Meet Esther A. Howland (1828–1904)
While Valentine’s Day history and its mysterious saints go back to Ancient Rome, written greetings started to appear after 1400. It’s estimated that Americans started exchanging homemade valentines and little gifts in the early 1700s. Still, this was far from the United States’ mass-produced holiday card industry we have today. Enter Esther A. Howland and her keen business sense to meet a growing Valentine’s Day need in America.

Esther’s father owned a printing company and stationery shop in Massachusetts, so paper goods were already near and dear to her heart. When she was 19, she received an English valentine and was impressed with the mass-produced card, donning paper lace and other fine details. So, she started importing paper lace and other decorative items from England to craft a few samples of her own valentines-themed designs.

From there, her brother who was a salesman for their father’s stationery store, took Esther’s samples on the road and returned with a request for over $5,000 worth of orders (a lot of money back then). That’s when Esther started her business, hired some friends and began an assembly line to make her mass-produced valentines.

Esther’s cards had added charm and unique details with paper lace, ribbon and colorful pictures. She used accordion-folded paper springs to add depth and create varying layers to her cards. Much like we die cut paper products today for custom shapes, Esther came up with the idea to use dies to cut her mass-produced paper decorations. Her stunning, meticulously made valentines grew popular over the years, helping her business gross over $100K annually. In 1881, at the age of 53, she sold her successful card business and was officially known as the “Mother of the Valentine” in the U.S.

Today, approximately 150 million Valentine’s Day cards are exchanged annually, making Valentine’s Day the second most popular card-sending holiday after Christmas. On top of that, women purchase approximately 85 percent of all valentines (history.com). So, while Esther A. Howland may not have been in your childhood history books, she sure had a huge impact on the way Americans celebrate friends and loved ones during Valentine’s Day.

If you’d like to make your own mass-produced holiday cards, but you don’t have the time or patience to go the handmade route, you can check out our different product options, from flat postcards to folded greeting cards. We can also help you think outside the postcard with custom die cut shapes, glitter coatings, shiny foils and so much more.